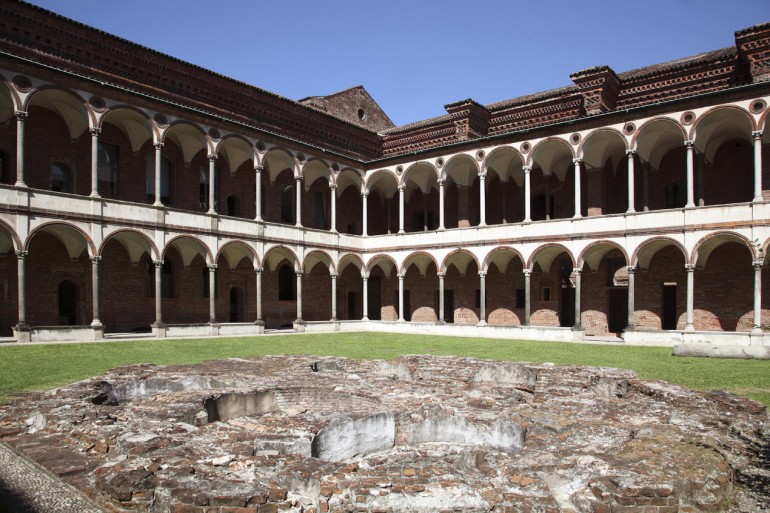 Designed by Filarete (Antonio Averlino, 1400 – 1469), who personally supervised the works from 1460 to 1465, the Cortile dei bagni (The Baths Courtyard) was completed by Boniforte Solari (1429 ca. – 1481 ca.). Initially, the courtyard was reserved for the recovery of the aristocrats, who paid for their stay at the hospital, and was called the “gentlemen’s courtyard.”While successively renamed the “women’s separate courtyard” as it was principally reserved to labouring women (the area around the San Nazaro church), it was also designated to the “scabbed”and the “delirious”of both sexes (the area by the portico), for it afforded a degree of isolation compared to the overcrowded wards of the Crossing.

At the beginning of the 17th century, the area was turned into the “servants’courtyard” reserved to nursing staff and attendants. The courtyard had a wardrobe (by the portico) and a wash-house (by the San Nazaro church). A surface well was located in the north-eastern corner, while a system of baths was constructed at the centre of the courtyard starting from the 18th century. The bathing complex had separate pools for men and women and, starting from 1802, also half baths that allowed partial immersions. These served for hydrotherapy and were located in the infirmaries.

Portico of the Infirmary
Woodshed Courtyard