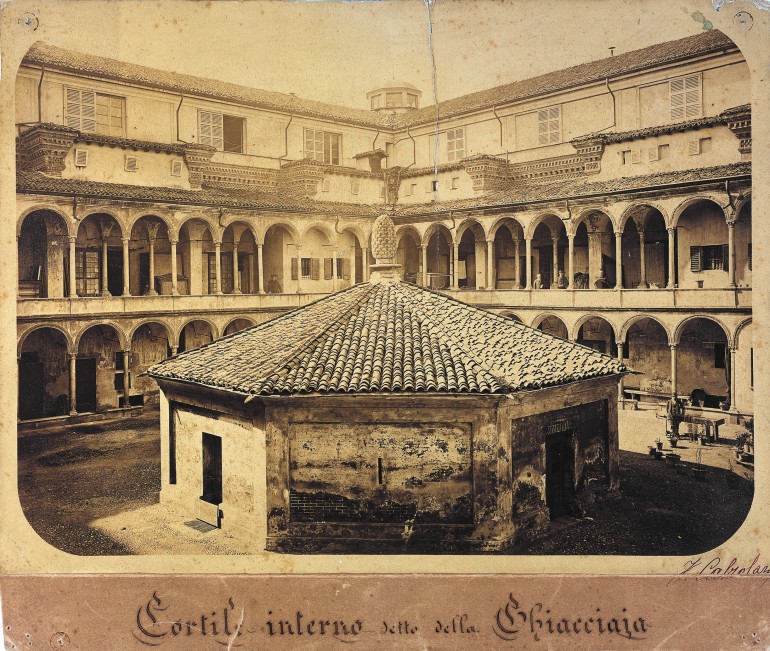 The work of Lombardy craftsmen, the Cortile della ghiacciaia (the Ice-House Courtyard) was a development of the project Filarete had started in 1486 when the hospital Chapter ordered the purchase of stones and other materials for the construction of the adjacent courtyard, successively knows as the Cortile della legnaia (the Woodshed Courtyard). Originally, the courtyard hosted a cemetery built, in 1473, by the master mason Ambrogio da Rosate at the back of the first chapel. The altar was initially placed where the crossbars met so that it could be viewed by all patients, so that they could assist the liturgical functions as was in the tradition of the ancient hospitals of the knights hospitaller of Jerusalem (present day Order of Malta). Successively, the chapel and burial yard were shifted, replaced by the apothecary’s workshop that was, in turn, transformed into the dispensary.

The ice-house, located in the central part of the courtyard, is mentioned for the first time in November 1638 as the cella nivaria, the “snow cell”. The reservoir was filled in the winter months with snow, which, appropriately pressed and wetted, was allowed to freeze and used to preserve perishable food and, possibly, also therapeutically to cure traumas, fevers, inflammations, gouts, etc. The exterior of the reservoir was surrounded by a semi-circular corridor that acted as a dispensary as well as a brick casing.

The ice-house was managed by hospital staff. A surface well, originally serving the apothecary’s workshop and built by Boniforte Solari (1429 ca. – 1481 ca.), was located in the south-western corner (1472). Overlooking the courtyard was possibly the old wash-house (1499), which could rely on an independent water conduit, and a mill, constructed between 1519 and 1523 along the Naviglio side, whose milling stones were found during the challenging post-war restoration campaign. The Ice-House Courtyard was, in fact, the part of the complex that was most damaged during the 1943 bombardments, and was fully restored in 1962.