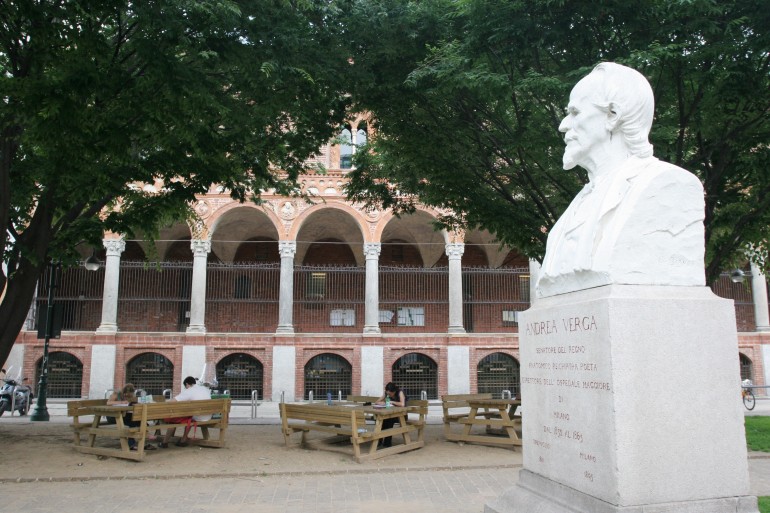 10. Portico of the Infirmary

Designed starting 1456 by Filarete (Antonio Averlino, 1400 – 1469), who conceived a series of sculptures in marble, stone and terracotta, the portico has conserved the original chromatic suggestions notwithstanding the fact that it underwent numerous changes even during the construction phase. The lower part of the façade up to the stringcourse storey demarcation can be attributed to the Tuscan architect. The basement hosted shops, stores and caneve or cellars. Along the portico were wooden lodges where surgeons and barbers operated and medicated the sick whose ailments did not solicit hospitalisation.

The portico featuring 29 rounded-arches that joined the Crossing was constructed between 1458 and 1462 by Lombardy craftsmen. In the arches’ intradoses, fragments of frescoed decorations – rhombuses and tondos – were brought to light. The terracotta arches were provided by Filarete himself who also made the decorative arch-shaped bands and the large and small tondos (1461). An arcade, not the central one, was designated as a vestibule of the mastra, or principal, gate and of the infirmary. To access it, a wide staircase was built, albeit with little practical sense.

According to Filarete – who was probably the author of the haut relief tondo depicting Francesco Sforza – it was Vincenzo Foppa who made the fresco on the portico with the scene depicting the laying of the cornerstone, while the Humanist Francesco Filelfo and the courtesan Tommaso da Rieti were the author of the epigrams still visible at the entrances of the Crossing. The upper floor was the work of the Lombard Boniforte Solari (1429 ca. – 1481 ca.), an engineer at the Fabbrica del Duomo, while the brother Francesco (1420 ca. – 1469) designed the 18 finely decorated balconies (1467). In 1597, the entire portico façade was shut with metal gratings, which gave to the corridor the name of Portico delle inferriate. In 1648, the central staircase was replaced by side ramps, which were entirely dismantled at the end of the century when access to the infirmary was ensured from the Central Courtyard (1686).