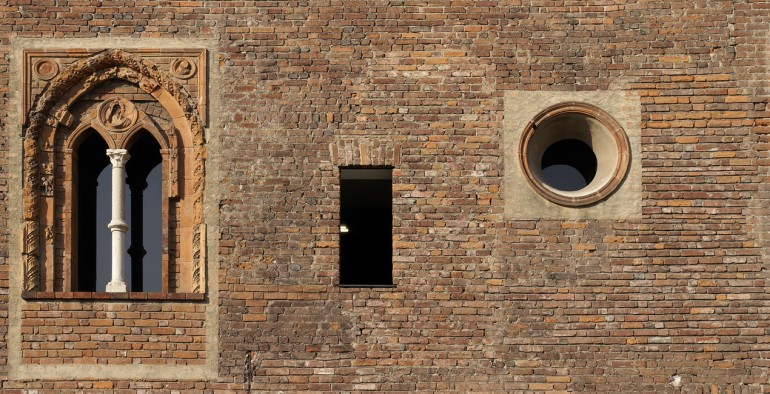 The mortuary service at Ospedale Maggiore had been authorised right from the outset with the 1456 foundational papal bull issued by pope Pius II (Enea Silvio Piccolomini, 1405 – 1464) and provided within the hospital premises soon after the hospital began operations (1473). The area reserved as a burial ground, the Sepolcreto, expanded rapidly not only because those who died in hospitals were generally not allowed to be buried in the city’s parish cemeteries but also because those who were buried in the hospital grounds were granted indulgence.

On 7 May 1473, the Ca’ Granda Chapter decided to build a small wall, by the Annunciata chapel (1473-1587) originally located in north-western side of the present-day Central Courtyard, serving to delimit a space for the burial of the poor who died in hospital. The bones were successively laid in the original burial ground, probably underneath the chapel itself. During the 16th century, as the number of patients, and therefore of deaths, grew, the lawn in the hospital grounds was turned into a paupers’ grave, the foppone or “pit” in the Milanese dialect, were the bodies were buried. The foppone was periodically emptied and the bones placed in the hospital’s burial grounds, which were known as the brugna. In the 17th century another burial chamber was created. Known successively as the ‘Old Brugna’ it was located under the church’s crypt. Other sepulchres – the New Brugna - were constructed along the Naviglio side (now via Francesco Sforza), remaining in use until the end of the 17th century, as C14 testing on several samples has proved.

It was only starting from the last decade of the 17th century that the decision was taken to build a new cemetery outside the city walls. Known as Nuovi sepolcri (‘New Sepulchres’) and now as Rotonda della Besana, the burial ground was established in July 1697, but the Brugna vecchia, however, was never totally emptied.

Photo: Detail of the facade from via Francesco Sforza,  by Vaclav Sedy, 2007.