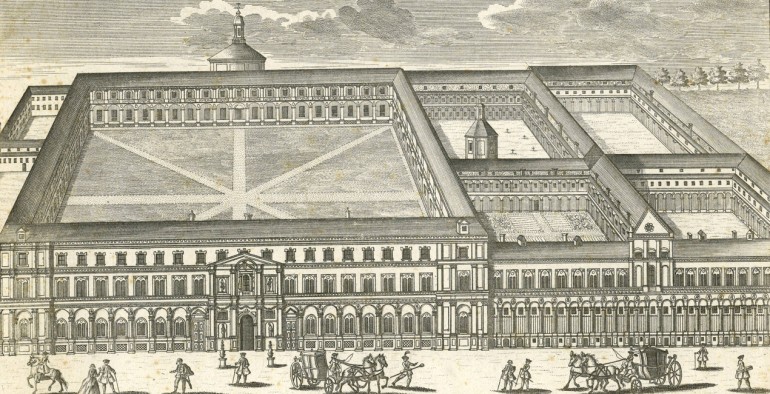 The promise made by Francesco Sforza (1401-1466) in 1451 to the people of Milan to establish “a large and solemn hospital” led to the decree proclaimed on 1 April 1456. The experience of the Communitas ambrosiana (1447-1450) had marked the final demise of the ruling dynasty of the Viscontis, and when Francesco Sforza triumphantly entered Milan he found a city that had been reduced to misery. In subjecting themselves to the new lord, the people of Milan hoped to obtain peace, stability and prosperity. They called upon the Sforza not to focus exclusively on strengthening his rule but also on reinvigorating Milan’s vocation in providing assistance to the needy as part of a tradition the city had developed over the centuries.

Shortly after the decree was issued, following the required official endorsement by pope Pius II (Enea Silvio Piccolomini, 1405 – 1464), the duke Francesco Sforza and Bianca Maria Visconti, his wife as well as staunch backer of the Sforza’s policy in providing assistance, laid the foundation stone of the hospitale grando, the “big hospital,” that by incorporating the administration of sixteen hospitals operating at that time in the city earned the appellation of maggiore, or “major.” Thanks not only to the quality of the services it provided to patients from all extractions and provenance, including non-residents and foreigners, but also to its ability to attract voluntary workers as well as donations from benefactors, the hospital was soon being acknowledged as the Ca’ Granda de’ Milanesi, the “Big House of the Milanese”.

The project was initially entrusted to Filarete (Antonio Averlino, 1400 – 1469), who sought inspiration from the potent symbol of the cross. The layout involved two crossbars, one for men and the other for female patients, developing within a square, each defining four square-shaped inner courtyards. The two larger blocks were thus connected by a large rectangular courtyard at the centre of which stood a church. The project underwent significant changes as the original architectural solutions had to be adapted to the rigours of the local climate and also scaled down as a consequence of the chronic lack of funds, that slowed down work to such an extent that construction was terminated but a few centuries later.